As I began a ladder safety class this week, I asked if anyone knew someone who had been hurt using a ladder. A man in the class said his 20 year old son had fallen from a stepladder and hit his head. The surgery required was so risky that the father had to sign a release to allow the surgeons to try it. Thankfully, he made a full recovery, but it was a long, painful and costly rehab process.

When I asked about the details of the accident, I was surprised that he had only been using a four foot stepladder. The ladder was too short, so he stood on the top cap and then over-reached, causing the ladder to tip. Once the ladder tipped, he fell to the ground. His feet fell the same way the ladder fell, but the rest of him fell went to the side with the ladder causing him to land on his head.

What We Can Learn 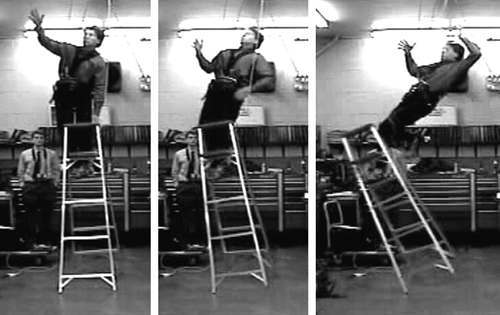 The son had had several larger ladders available, but he chose to carry the smaller ladder because it was lighter. Choosing the lightest ladder, regardless of whether or not it will do the job, is a common safety problem on every job site. Once workers start working and find the ladder is too short, they rarely go back and get the larger ladder. Workers climb on the top rung or the top cap of the ladder to gain extra height, leaving them nothing to hold on to.

Now that you know workers have a tendency to choose the wrong ladder, what are you going to do about it? The most important thing is to train employees about the importance of choosing a ladder that is tall enough for the job. The next step is to enforce this rule. Make sure you correct an employee each time you see him using or about to use the wrong ladder.

Little Giant has worked to design a ladder that should reduce these types of accidents. The Select Step is a six foot A-frame ladder that adjusts to be a seven, eight, nine or ten foot ladder. It is still relatively light, but can be adjusted if the worker realizes he or she needs a taller ladder than expected. The ladder also has wheels

to make it easier to move around.

Hopefully we can do a little better job of training, enforcing and using the better products so no one else goes through what the man’s son went through.